Tokyo, Japan, February 22, 2022—SuRaLa Net Co.,Ltd., Japanese leading EdTech company, held the online ceremony for “the 18th Surala Cup” on February 19. “Surala Cup” is an unique Japanese learning event to compete by learning the amount for two months among users of e-learning provided by SuRaLa Net. This year, International students joined the event to share their experience for the first time in the history of Surala Cup. 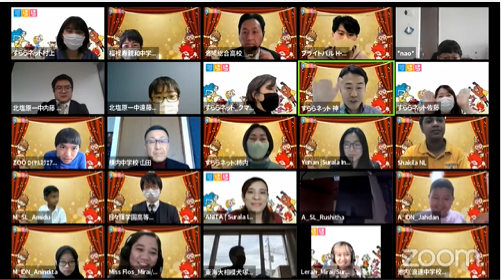 The “Surara Cup” is a competition held for two months from December 2021 to January 2022, in which learners of the services provided by SuRala Net Inc. competed against each other, regardless of grade level or region of residence, not based on deviation or score, but on the “amount of effort” such as “total study hours”. On Saturday, February 19, 2022, it held a global online awards ceremony where not only domestic students but also students studying in Sri Lanka, Indonesia, and the Philippines gathered to announce the rankings and present awards.

The 18th “Surara Cup” had 15 awards, the largest number ever, to honor and commend the “efforts” of students from various angles. For example, the newly-created “English Speaking Award” competes for the number of times a student speaks English using the “Speaking AI,” which provides a detailed evaluation of pronunciation and intonation.

In addition, for the first time, students from Sri Lanka, Indonesia, and the Philippines, who are studying in the respective language versions participated in the “Mission Accomplished Award” for achieving the monthly learning time target set before the period, and the “Perfect Attendance/Nearly Perfect Award” for continuing to study every day.
A total of 139 students from the three countries received the Mission Accomplished Award and 45 students received the Perfect Attendance/Nearly Perfect Award.

At the award ceremony, the awardees participated in real time and gave their award speeches while the awardees from Japan and other countries, teachers, and parents looked on.

By receiving the award at the global “online award ceremony”, the participants could experience stronger success and gain a sense of self-esteem and self-accomplishment that they can do if they try.

The recording of the online ceremony is available on YouTube:
https://www.youtube.com/watch?v=iJPzxXBWfvs

By recognizing and evaluating “effort” rather than grades, Surala Net will continue its efforts to foster a “can-do” mindset in children.

About the e-learning material “Surala Ninja!”
This e-learning system is developed for elementary school students as an overseas version so that students can enjoy learning the four rules of addition, subtraction, multiplication, and division through interactive animations. Students can learn at their own pace on their own devices, and educators can adjust the learning content based on students’ understanding and progress through the learning management system, thus realizing personalized learning for each student. Currently, there is a Sinhala version for Sri Lanka, an Indonesian version for Indonesia, and an English version that is mainly used in India and the Philippines.

About SuRaLa Net
With the corporate philosophy of “Innovate education, empower children to drive their futures” SuRaLa Net provides the adaptive interactive ICT teaching materials “Surara” and “Surara Drill” to more than 400,000 students in about 2,500 tuition schools and schools in Japan. While our products are widely used in public schools, famous private junior and senior high schools, and major tuition schools nationwide, we continue to grow by providing learning opportunities for students with developmental and academic disabilities, truancy, and those from economically disadvantaged households, as well as other solutions to Japan’s educational issues, and listed on the Tokyo Stock Exchange Mothers in 2017 as a leading EdTech startup company.
Starting the overseas business in 2014, we introduce our solutions to private schools and tuition schools in many countries. We started our overseas business in 2014, and our e-learning have been introduced to private schools and tuition centers in various countries. In recent years, Japanese-style education has been attracting attention in many countries around the world, and the Japanese government has been working to support the overseas expansion of EdTech companies. Following the “Future Classroom” overseas development support project implemented by the Ministry of Economy, Trade and Industry (METI) and Japan External Trade Organization (JETRO), which was adopted last year, this year, SuRaLa Net is working as an authorized project of the “EDU-Port Japan” pilot project, which the overseas development of Japanese-style education through collaboration among all-Japan including the public and private sectors.